So I’m sure there are plenty of runners who have been waiting for the start of the new year to buy their new running shoes. Whether that’s just to catch the best deals in the January sales or because they are starting a new training plan for an event or race.

Many experienced runners will be about to up their training ready for the London Marathon in April or even Ironman UK in Bolton in the summer.

After all running is easy – right? And its cheap? And its flexible?

Most of this is true until you start getting serious and start spending money on expensive technology or just get obsessed with buying new kit and entering races.

There are now a lot of events aimed at the beginner runner and it’s definitely become more accessible and acceptable to be pounding the pavements in luminous lycra.

There are online groups for every sort of runner and racer even the virtual one if that’s you’re thing. New mums are taking to running with buggy’s to get fit and every Saturday morning thousands take part in the park run. There’s the coach to 5k which is an amazing initiative and a great safe programme to follow if you’re new to running.

Anyway back to those running shoes! It really doesn’t need to be that complicated. Try not to over think it but do invest a bit of money in some decent running shoes – it really is your most important piece of kit (along with the sports bra ladies).

Don’t try to get away with running in your 5 year old converse that you wear for walking the kids to school or those 20 year old trainers you’ve only ever worn on holidays but have been through the washing machine a few times so look like new.

But where do you start? ‘Neutral’ ‘Cushioning’ ‘Stability’ ‘Motion Control’ and what does ‘Zero Drop’ mean? What size should you go for?

Until you’re doing lots of mileage every week you just need a good pair of decent running shoes that are fit for purpose. I usually recommend spending £50 -£80 and if you’re just getting started you really should only be doing about 2-4 miles 2 or 3 times a week to allow your body to adapt to the exercise and loading gradually.

The biggest mistakes new runners make is thinking they can get away with old footwear that isn’t running specific, doing too much too soon with no days off in between and not stretching.

It’s very difficult to give generic footwear advice as what suits one person another person really won’t like so I usually suggest that if as far as you know you don’t have any issues with your feet or how your feet function and you don’t think they are particularly unusual as feet go well you have to start somewhere so stick with one of the big 4 in terms of running shoes Asics, Brooks, New Balance or Saucony and just chose neutral / cushioning then you won’t go far wrong.

So look on a recommended website such as www.sportsshoes.com or www.startfitness.co.uk and narrow down your choice by choosing footwear, running, mens or womens, brand and size and hopefully you’ll find something reasonably priced that will start you off on your running journey. 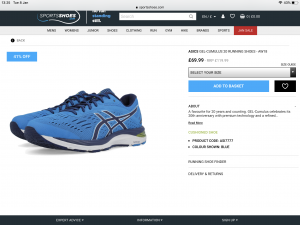 Most importantly take it easy, enjoy the fresh air and stretch when you get back. And don’t forget to replace those running shoes, probably next January…..