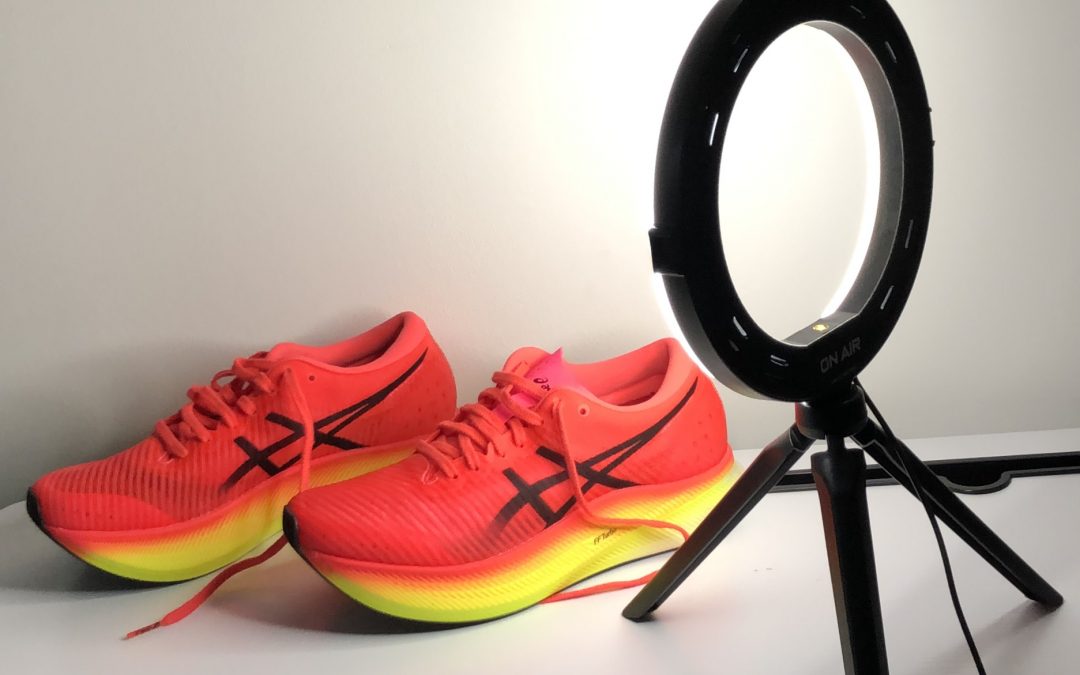 The first release of what has become known as the ‘Super Shoe’ was 2016 with the Nike Vaporfly 4% – said to improve the running economy of highly trained runners by around (you guessed it) 4% and the data gathered since their release appears to have proven that to be correct.

They were initially found only on the feet of elite runners – many of which were sponsored to wear prototypes but they then made it into the general market in 2017 and now it seems that if you turn up on race day wearing traditional shoes you might be at a disadvantage in terms of your finish time….

So we know that these shoes are fast! They will knock seconds off every mile you run which over marathon distance is a game changer. But what about the cost of them? and how long are they going to last? And what about injury risk? And if you wear orthoses do you wear them in these? Do you wear them for all runs or just for racing?

Lots of questions and still lots of unknowns at the moment. It’s actually very difficult to do meaningful research on running shoes as there are so many variables and no one shoe suits all runners the same. This has always been the case and Super Shoes are no different. It is known that there will be responders to the new technology and non-responders.

The Vaporfly 4% was the first of what has become a whole new generation of super shoes made from new materials and radically innovative designs aimed at dramatically improving running performance. 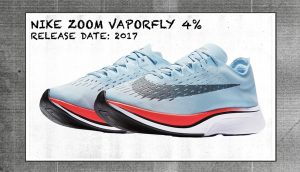 Super Shoes appear to be defined by their common technological features:

*The thickness of its heel (stack)

*The incorporation of a carbon fibre plate

The PEBA foam used by Nike and the variations on it used by the other top players in the market is thought to store far more energy from foot strikes and to return more energy to the runner than the TPU and EVA of traditional running shoes. It’s also much lighter.

The heel thickness of up to 40mm appears to be significant. It is around 10mm thicker than that of more traditional running shoes. This helps to accommodate the technology and also increases the leg length of the runner – also thought to be significant in altering running economy and efficiency.

The pace in which running shoes has been changing over the last 5 years has been difficult to keep up with but we do now seem to have reached the stage where all of the major brands in the running shoe market have released their take on the super shoe and World Athletics issued updated guidance in Aug 2020 permitting a heel thickness of up to 40mm in road running shoes indicating that Super Shoes are here to stay but also that they needed regulating.

Deciding Which One Is For You?

The Nike Alphafly is currently at the top of the list in terms of super shoe qualities with the maximum high stack of their zoomX foam and a full length carbon plate costing £295. Nike have then used the same materials in their Vaporfly Next% but with a lower stack, a larger drop but still with a carbon plate costing around £230.

Adidas have the Adizero Adios Pro, Saucony have the Endorphin Pro, New Balance have the FuelCell RC Elite, Brooks the Hyperion Elite, Asics the Metaracer and the Metaspeed Sky and Hoka One One have the Carbon X. They all have slightly different versions of foam and slightly different variations of a carbon plate but it would seem that it is this combination of these two properties that works. 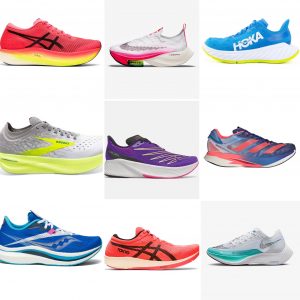 As with traditional running shoes they are all made on different lasts with different fits which suit different feet and they all have different stacks, different drops and some will take orthoses and others not. But this has always been the case with running shoes except its never been so expensive to make a mistake.

Running has always been sold as a cheap hobby – needing nothing more than a good pair of running shoes and a good sports bra for female runners to go with a bit of basic kit and some fancy technology on your wrist if you chose to get serious about your running data.

Historically a good pair of running shoes has always been obtainable for under £100 until recently and you have always been able to expect them to last on average 500 miles….

With so much choice available and all of the brands now getting into the super shoe game it can make for a very expensive mistake if you end up not liking them or deciding you chose the wrong one….

As a runner and a sports podiatrist it has never been a more exciting and challenging time! Trying to combine running biomechanics, individual foot types, types of running, training programmes and racing alongside treating injuries and managing injury prevention whilst trying to guide patients through the minefield of running shoes is certainly keeping me on my toes. – Never mind trying to chose which one I think I should invest in……

If you’re serious about your running and love it then why wouldn’t you want to take the leap – its exciting!!! And who doesn’t want to treat themselves at the moment after the last 2 years! Running has been one of the only things we have been able to do uninterrupted by lockdowns.

However I have seen a number of patients over the last 2 years that have taken up running largely due to lockdown and they thought a new pair of super shoes were fine to wear for all of their runs and unfortunately got injured. Most of them did also make the usual new runner mistakes of too much too soon so its difficult to say whether it was their training mistakes or the shoes that caused their injury.

If you are just coming back from an injury or have suffered recurrent injuries due to your running biomechanics then you should probably be cautious and if you wear foot orthoses for managing load and mechanical overuse injuries then not all super shoes will accommodate them. – something to bear in mind and your decision might depend on the reason your were prescribed orthoses in the first instance.

If you do have a history of injuries there are actually some elements of the design of super shoes that may help – the very nature of super shoes is to improve an individuals running mechanics. They may even be able to replace your orthoses in some circumstances – especially for those short runs and races. This again is very subjective and for every runner who’s mechanics would improve with the technology of the super shoe there is a runner who’s mechanics would be effected detrimentally. An example of this might be a runner like myself who is quite unstable at the ankles. I have had ankle injuries over the years that have resulted in my ATFL ligaments being non-existent so the high stack of these new generation of shoe actually makes me feel quite unstable – especially over longer distances.

If you are serious about your running and you don’t mind having several different pairs of running shoes for different types of running and you have the budget to treat yourself to something ‘special’ for race day and some of your training runs then the super shoe can be a lot of fun and you could most definitely achieve a new PB.

What Did I Choose?

In the end I decided on the New Balance FuelCell Elite RC. After reading lots of reviews and trying a few of the variations I liked them because they have a 10mm drop, they will accommodate my orthoses and I felt like they gave me a fast bouncy gait similar to that reported with the Nike shoes whilst still feeling quite stable and a bit more affordable. They feel like a real treat for potential race day shoes and a faster-shorter training run but I don’t think I’ll ever be using them as my every day running shoe – for one I’d be having to buy a new pair every 3 months and I do like to rotate my shoes and mix it up. Don’t get me wrong though I’d love to try the Brooks Hyperion Elite which are meant to feel fairly stable and I hear lots of great things about the Saucony Endorphin range. The Asics Metaspeed Sky feel amazing but just don’t accommodate my orthoses which might be okay for shorter distances but I wouldn’t want to run a marathon without my orthoses. 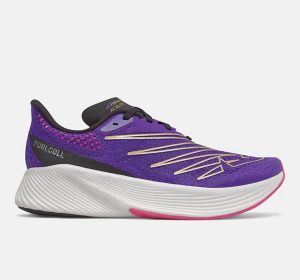 The big brands have now started to introduce slightly cheaper less spec’d versions which might appeal to the wider running market and the budget of the non-elite.

They have some of the features of the super shoes and some have actually had better reviews from testers. For example the Saucony Endorphin Speed has had great reviews and some runners have favoured them over the more expensive carbon plated Endorphin Pro for their affordability and because they are designed more for every day runs and higher mileage.

In summary it would now appear the Super Shoe is here to stay! – They all have different qualities so there is something for everyone and as long as you do your research first and understand which features would suit you then you can hopefully avoid an expensive mistake and chose the most suited super shoe for you and the type of runs you do. There is certainly no harm in adding a pair to your rotation.

But if you’re a runner who only uses one pair of running shoes for all of your runs – from short fast runs to longer threshold training runs and your races then these are probably a very expensive toy and in fact are not really suited to the casual runner who runs for fitness rather than PB’s.

If you don’t want to or can’t afford to buy into the whole super shoe experience then there are lots of reduced spec but more affordable options from all of the brands. I’ve already mentioned the Saucony Endorphin Speed and even more affordable is the Asics Novablast which has some features of their super shoe such as the foam and the high stack but without the addition of the carbon plate. Brooks has the Hyperion Tempo which has their DNA foam but again no carbon fibre plate.

There really is something for everyone now and I think the pre-used shoe market is going to be huge business.

Which ever shoe you decide to run in Enjoy!!!! – let me know your thoughts and please share your experiences on social media with me.